In 2003, I sent an email that almost sank my business.

In it, I told our biggest client what I really thought of him.

To be clear, I wasn’t being brave or principled … it was a colossal, testicle-tightening mistake. At the time, his group represented 70% of our business.

Here’s how it happened.

A colleague emailed me, requesting the client’s email address … and asking what I thought of him.

No problem. I hit reply, typed the first few letters of the client’s name into the address box (to copy his email address) then wrote a few honest words.

Because you are human – and have done the same thing – you’ve probably already guessed my mistake.

I hit send without deleting the client’s email address from the TO field.

I can still remember the horror when I realised what I’d done … the feeling of my balls climbing back up into my body.

And it didn’t matter that it was true.

All that mattered was the hammer … and when it would fall.

A day passed. Then another.

Then the client called up … and offered us more work.

It turned out the email had gotten his attention.

Turned out he valued straight-talking.

And it turned out that my ‘honesty’ had triggered a new story about me and the agency I’d founded – a story that he was in a position to spread.

All of which gets me to the reason I’m telling you this.

That’s the good news, but – like everything – it has a flip side…

Without a story, we’re kind of invisible

I can’t remember the first time I heard the phrase, Attention Economy, but it stuck in my head like a fishhook. You didn’t need to be a genius to see where things were headed.

And here we are.

A world ruled by algorithms that are optimised for attention.

Whatever you do, don’t look away. Keep feeding in the beast, keep optimising for views, likes, shares, claps, hearts, or whatever.

After all, they’re easy to measure.

It reminds me of a mug we gave my son when he turned 18. 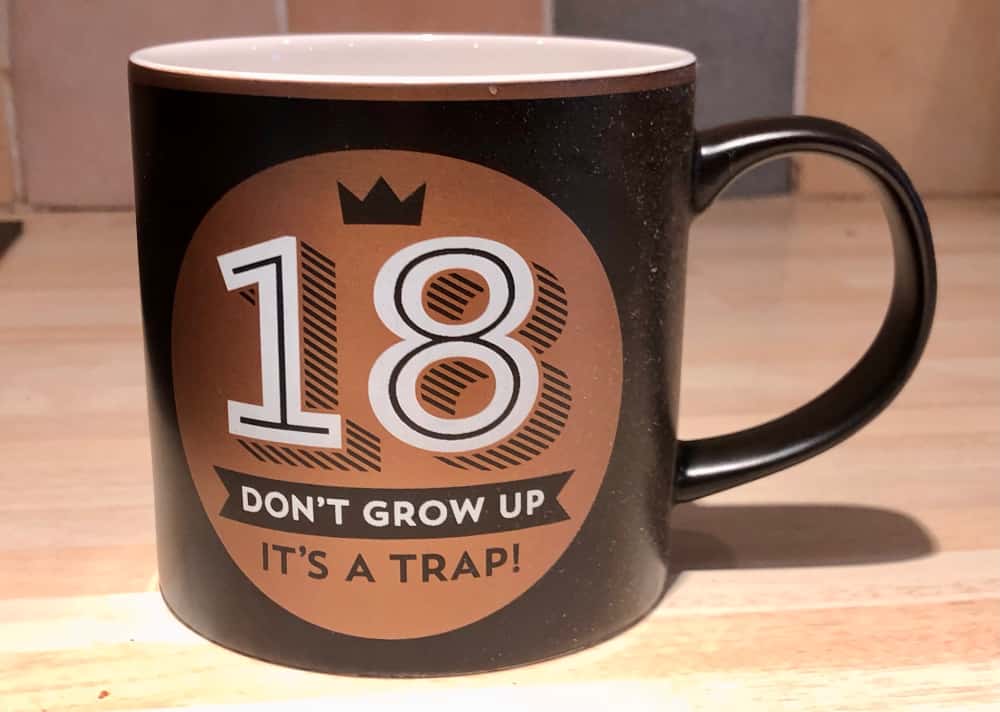 Do you know what I mean?

Attention is a trap.

I know … plenty of smart people are keen to sell me their ‘exclusive’ method/plan/scheme/hack/secret way to get it.

And by the way, if you’re interested … they are also probably offering a one-time, never-to-be-repeated discount WITH bonuses!!!

(But only if you buy right now.)

Here’s what I see.

Attention is necessary, but not sufficient.

And it’s also an arms race. I shout. You shout. Everyone shouts.

Then, I shout louder, and on we go. Pretty soon, all we have is a headache and the desperate need for the next shiny tactic. (And it’s a junkie’s need if we’re honest. Another fix from the siren hamster wheel of hope.)

But it’s more serious than a headache because the louder we shout, the more we risk losing the one thing we really need to build the kind of businesses we want to own.

When we spam people, or manipulate them, or feed their fear, or exploit a (temporary) weakness in the algorithm … it may work … at least for a while.

But in the end, they are burned and so are we.

Our brands. Our businesses. Our reputations.

I say “we”, but that wasn’t the kind of business I wanted or built, and I’m guessing you are the same.

Which is why we are both here.

So let’s back up again, and come at this from a different angle…

The advantage of hating sales

By the time I made the email mistake in 2003, I’d been running my agency for six years, and we were a weird mutant in the digital space.

We did no marketing, no cold-calling, no face-to-face selling, no advertising, no social media … nothing like it. In 1997 – when I’d accidentally started the business – I’d learned that I hated sales.

For a while, I suffered from imposter syndrome … like I was a bad businessman who’d be ’found out’ at any minute.

But then again, opportunities kept rolling in without me ever really doing it … and by the time I sold the company, in 2018, we had clients around the world.

I don’t say that to impress you, just to emphasize the thing we did do.

We didn’t call it that at the time, but that’s what we were doing.

And those stories spread.

Mr 70% – who eventually became a friend – was a classic example. Over the years, he recommended us for projects across his group.

Maybe you think that’s pretty dumb since I sent him the email by accident – but we’ll talk about that if you choose to come on this journey.

In the meantime, it’s worth emphasizing something obvious…

Not all stories are created equal

It’s like business … Some companies struggle, forcing their way through stony ground, in need of constant “selling” to add growth. Others seem to spread like bamboo, strong and straight and fast. Needing nothing.

The sense that you were working with reality, not against it.

Let me give you a real-world example.

In 2020, I worked with Luke, the UK’s Entrepreneur of the Year. Over a few sessions, we crafted a story he could use to build his brand. Two months later, he was asked to be the keynote speaker at a conference, and we turned it into a speech.

The reception was fantastic.

“Dude, you’ve taken my story and brand to the next level.”

His words, not mine.

To state the obvious, we didn’t change him or his business. We didn’t make anything up. This wasn’t a deal or a secret formula or a one-time-only offer. It was the strategic decision to create a long-term asset.

The word ‘strategy’ is often abused, but I’m choosing it deliberately here. Luke was investing in his long-term goals … in a story that built attention, connection and trust.

It started with the keynote speech, but in the 18 months since, he has leveraged his story across podcasts, books, radio, and television.

Can you see the progression there?

That’s a strategy at work, and it holds a powerful lesson.

You can change your story.

It’s worth reading that again and letting it sink deep into your brain.

You can change your story.

In fact, if you are serious about building a business that lasts, you may have to.

The world is changing

Before I close, I want to pull a couple of these threads together.

Early on, I said that without a story, we’re kind of invisible. My guess is that you feel the truth of that.

But we also talked about the tidal wave of content in the world and the trap of attention. More noise. More stress. More of everything … except results.

None of that is going away. It’s going to get worse.

But if you are ready, there’s another path.

Step back and raise your head.

The shitshow is generally right in front of us – a foot from our face. The hype, the headaches … it’s all right there. Short-term. Urgent. Demanding. Exhausting.

But if we raise our eyes to the horizon – when we take a moment to breathe and look ahead – the noise subsides.

What will your business look like in a year?

What about the year after that?

That’s how Luke was thinking – and let’s be clear – he wasn’t just leveraging his story. He was compounding it with another asset, one that social media seems to have drained from our lives and our brains.

It’s hard to be strategic when the internet is screaming in your face, but that’s the path out of the trap.

In August 2019, I decided to build a new business around storytelling and started the world’s slackest podcast. I did an episode every day.

In the short-term world of the attention economy, it was a waste of time. No listeners. No feedback. No going viral.

By October 2021, I’d done over 750 episodes, and I was interviewing Seth Godin – a rockstar in my world!

Again … can you see the progression?

That’s a strategy at work … a consistent story compounded over time.

I’m not saying it was easy, but honestly, when does ‘easy’ ever deliver? I mean … ever?

In the early days of my agency, we used to talk to clients about ‘cutting through the noise’, but now that feels quaint.

You can’t cut through.

The only thing you can do is take a breath, look up, and rise above.

And that starts with your story. .. and the story that others are telling about you.

Of course, there are tools and techniques that will help us – but story goes way deeper than that. It’s not some shiny object or short-term tactic. It’s the deep, rich soil that reaches back into our evolutionary past. It’s art and science and marketing and philosophy, and a whole lot more.

At the top of this page, I told a true story about how I learned the value of saying what I really think.

So here’s what I really think – this journey isn’t for everyone.

But if you are searching, or building … or maybe if you are just tired of that constant throbbing headache, subscribe here and explore a different world.

We’ll begin with a 7-day journey into the story world, then deepen our insight every couple of weeks.

This is the Story.Business newsletter.

But only if you are ready?

We’re going to start by rewiring the way we see the world.